aximilian’s triumphal procession is an art-historical monument of superlatives: with a pictorial scroll over 50 meters long, Emperor Maximilian I commissioned a project around 1510 that eclipsed all his previous ones.

The representation of music played a central role in this, because as an audible representation of the imperial claim, it shaped life at court on all levels, in both public and private settings: Be it that the arrival of the ruler or his representatives was announced by timpani and trumpets, that the Alta Capella played with shawms and trombones for the state ball, or that the court danced in a small setting to single-handed flute and drum; be it that the singers of the chapel celebrated a solemn, polyphonic mass in the cathedral with organ, or that German songs were sung in several voices to the lute in the queen’s “Frauenzimmer”. Music was omnipresent in Maximilian’s conception of the state and contributed to his fame and honor even in the emperor’s absence. With the emergence of song printing, the songs of his court even penetrated into the living rooms of the citizens. And although Maximilian’s self-image was still wholly captivated by medieval notions of noble chivalry in almost romantic transfiguration, he made use of the most modern means of his time for its dissemination: he relied on the latest technology with letterpress printing to spread his message as widely as possible, not only with his “Triumphzug” but also with most of his other “gedechtnus” works – today one would perhaps say: influencer campaigns.

Thus, it is not surprising that presentation of Maximilian’s court chapel in the triumphal procession had a central role: in the front quarter of the triumphal procession several fully occupied and animal-drawn carriages are reserved for the presentation of his chapel, including a lute and viol consort, harp, organ positive, crumhorns, cornett and shawm, one-handed flute and drum, and of course the chapel with its singers and boys. Members of various loud “Alta Capella” ensembles follow on horseback, underlining their high status: mounted timpanists and trumpeters, trombonists and shawm players. The great composers of their time were also portrayed: Heinrich Isaac, Maximilian’s great court composer, the organist and composer Paul Hofhaimer, the tine player Augustin Schubinger and the court lutenist Albrecht Morhanns, called Artus, together with Adolf Blindhamer, who was still young at the time and whom Albrecht Dürer would later count among the best of the lutenists. Even a son of the city of Basel, the singer and composer Ludwig Senfl, was already involved, but was to have his big breakthrough only in the years after Maximilian’s reign.

According to the plan, a frieze of 200 prints lined up was to depict his court in all its splendor – a demonstration of power that was to have an effect both externally and internally in order to consolidate and expand the dynasty’s rule over a multi-ethnic state. The best artists in the German-speaking world of the time were consulted for the pictorial program: Hans Burgkmair drew up the plan and sketches, and among the performers was even Albrecht Dürer, in addition to the painter and woodcutter Albrecht Altdorfer.

ReRenaissance takes the colossal pictorial document of Maximilian’s triumphal procession as the occasion for its first festival, to be held from September 22 to 25, 2023: For three consecutive days, well-known Basel early music ensembles – including the ensembles Leones (conducted by Marc Lewon), I Fideli (conducted by Catherine Motuz & Josue Melendez) and Phaedrus (conducted by Mara Winter) – will perform music related to Maximilian’s court: although no scores have survived directly from his court chapel, numerous music manuscripts from the period around 1500 and the song prints of the early 16th century are indirect witnesses to their rich musical output. The ensemble instrumentations are chosen in such a way that completely different areas of court music are brought to life: the intimate sounds of lute, harp and viols accompany the new tenor songs, which came to wonderful flower under Maximilian; the loud wind instruments play motets and red-hot instrumental music artfully on trombones and tines; and the singers spread out their magnificent polyphony.

Parallel to the main concerts centered around Maximilian’s court chapel, “noontime concerts” are planned by young ensembles that have come together in recent years at the Schola Cantorum Basiliensis, rounding off the picture of the triumphal procession and enriching it with numerous facets: for example, the “Swiss couple” of transverse flute and drum, which also plays for dancing and accompanied the masked balls at Maximilian’s court, will be heard. 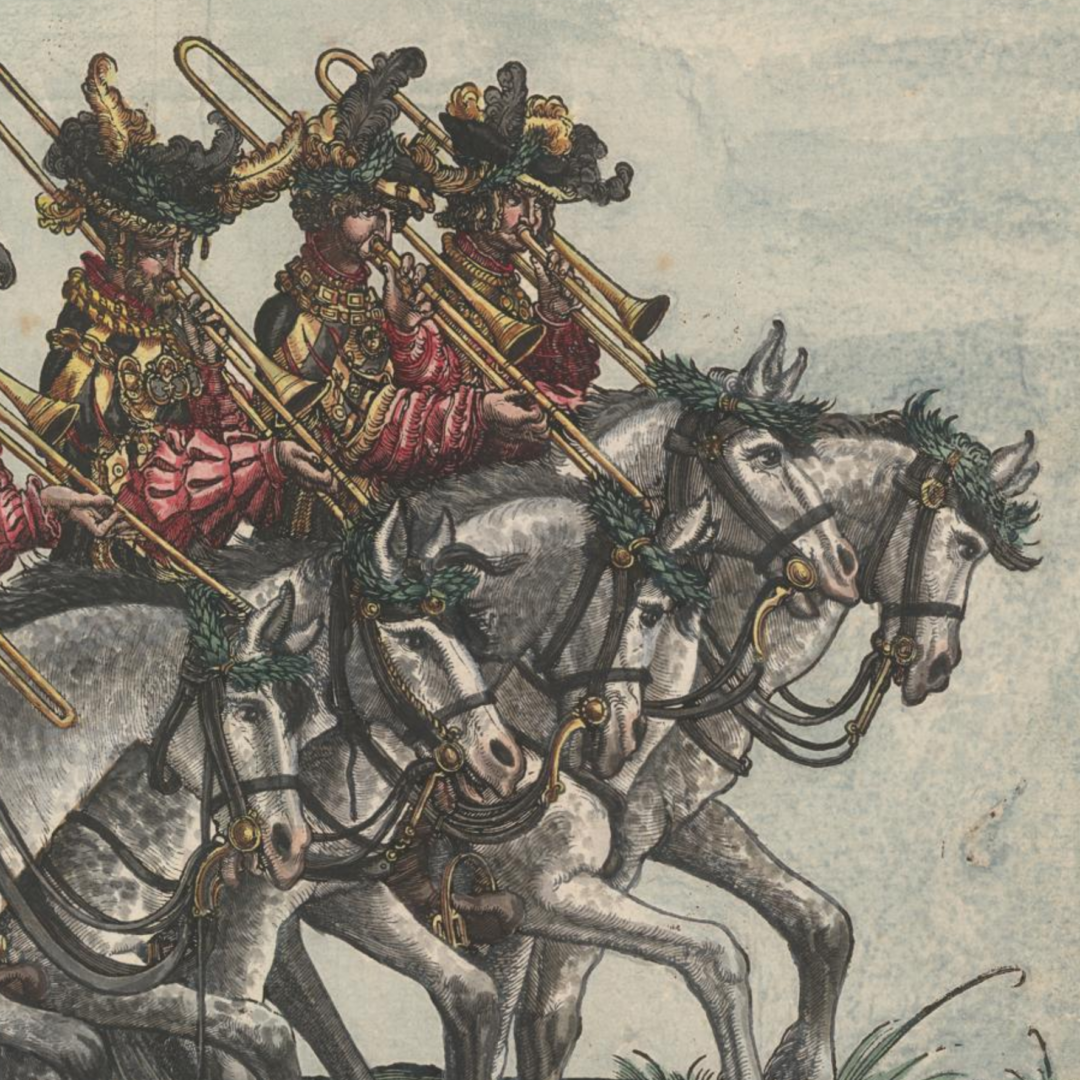