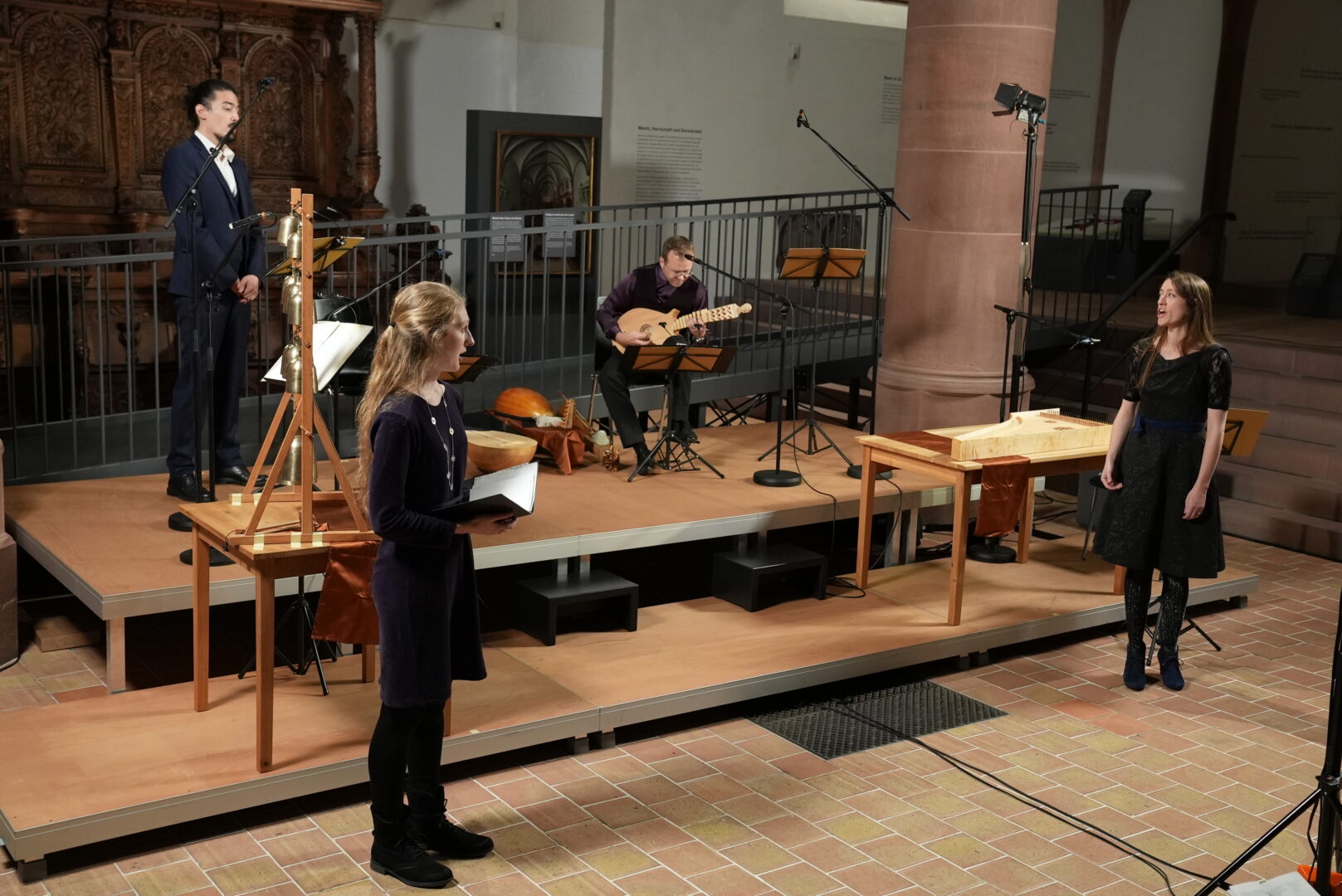 hristmas Caroling” is still the English term for singing during the Christmas season. It was no different in the early modern period. But while today “caroling” is understood to mean that solemn singing primarily as a Christmas accompaniment, in the England of the 15. and 16th century performed throughout the year on all kinds of festive occasions: religious feast days, political events, church processions and other celebrations. The English “Carols” were not reserved only for the trained musicians. Thus, we invite the audience to join us in celebrating a performance practice that brought people together 600 years ago. 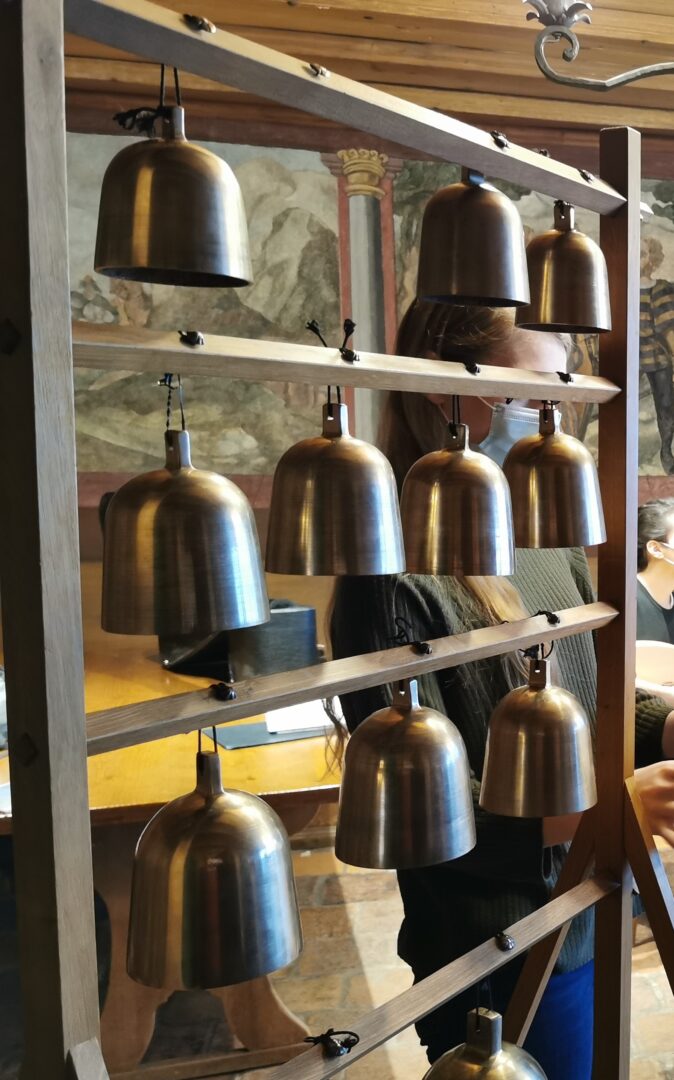 I am a joly foster

Thomas Christ (TC): How does a young woman become a choral director at traditional Hertford College, and how does her interest in medieval music, a field dominated by men for centuries, emerge and grow?

Grace Newcombe (GN): In fact, my initial music training as a child and teenager was almost entirely male-dominated: My musical training began as a church choir singer, which causes controversy in England to this day. 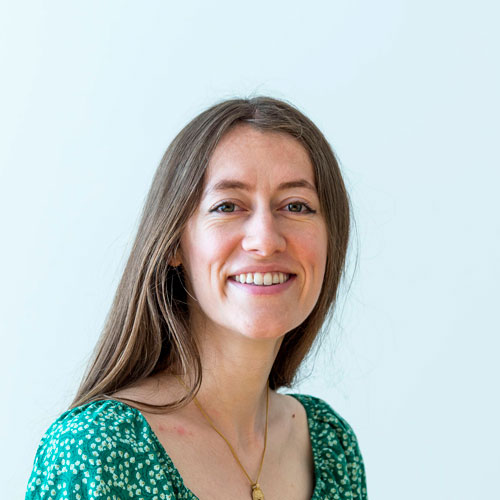 Many people think that a church choir is only for boys. My later training as an organist and church choir director was met with surprise in many places. Then in the organ and choir director courses I was always the only woman. When I tell people that I work as an organist at Oxford University, they are usually visibly irritated. That’s a little frustrating. But both the institutions where I was educated, Salisbury Cathedral and Hertford College, Oxford, were fantastically committed to gender equality. Salisbury was one of the first church schools in England to admit girls. And in Hertford, I was mentored by a wonderful chaplain who was very supportive of my work in the church.
I owe my love of early music in large part to the Salisbury Cathedral Choir. I’ve been singing Renaissance music since I was eight years old, and that fondness lasted until I moved to Basel in my early 20s. Here I then discovered the music of the Middle Ages, and one could almost say that the more I settled in Basel, the deeper I slid into the world of early music. And yet – if I hadn’t been allowed to sing along at Salisbury Cathedral because I was a girl, who knows if I would have discovered early music at all.

TC: Your musical education was not limited to singing, but obviously piano, organ, the clarinet and also the small harp played a role. Was the study of the voice always in the foreground?

GN: This may be hard to believe, but the actual decision to focus on singing came late, when I joined the Schola Cantorum. As a teenager, the organ and the clarinet were among my main instruments, and of course I couldn’t stop singing – this was always very close to my heart. But I had an unquenched curiosity to learn new instruments. So I devoted myself to the drums, the saxophone, the violin and the small Celtic harp. At the university, the Renaissance lute and the viola da gamba were added. Today I am happy to have learned to play many instruments, because it allows me to pick up new “foreign” instruments from the world of the Middle Ages and to accompany myself while singing, which of course gives a lot of pleasure. Moreover, I consider it an advantage that I had no classical vocal training before joining the Schola Cantorum, because in this way I was directly and specifically confronted with medieval and Renaissance music in my professional vocal training.

TC: Among your musicological specialties is research into the performance practice of the songs and song texts of the 12. and 13th century, that is, the English High Middle Ages. Can you briefly tell us something about this musically rich time?

GN: The history of English song in the Middle Ages is indeed highly interesting, because it describes a multilingual song culture. Put simply, the educated people spoke and sang a kind of Old French, while the uneducated used English. Thus, in addition to the rich tradition of Latin textual sources, there was also an enormous vernacular fund of song texts that varied greatly in style. Surprisingly early interest in polyphony arose in these English songs, and this enjoyed great popularity already in the Middle Ages. The polyphonic folk song has been a well-known and popular art form since the 12th century. So it was clearly not an invention of courtly culture. Thus, in my dissertation on this subject in particular, I came to realize that the history of the style and playing of polyphonic and monophonic songs in England is very different from those in the French and Latin cultural areas. The British Isles at that time enjoyed an exquisitely rich and complex vocal culture, recognizable and manifest in at least three different linguistic styles.

TC: Your most popular accompanying instrument is not the guitar, not the lute, and not the hand organ, but the small harp. How did this choice come about?

GN: The question of that harp is really a story of other people’s kindnesses. At a young age I was given a Celtic harp, an instrument I loved and admired. Then, when I was asked to choose an instrument as a minor at the Schola Cantorum, the harp seemed like the ideal choice. Moreover, I was lucky enough to receive a scholarship from the Leverhulme Foundation in England. However, the Board of Trustees determined that “merely a Celtic harp” could not be the ideal instrument for a study of medieval music. Thus, it was decided to finance not one but two harps, one for the music of the High Middle Ages, and a Gothic harp for the Late Middle Ages. This was fantastic because it allowed me to continue my studies with the medieval harp thanks to the Leverhulme Foundation. And so I care for my three harps to this day. My little instrument, by the way, is colorfully decorated with ivy and small birds, much in the manner of the illuminations of medieval manuscripts.

TC: In the Renaissance, with the rich emergence of new musical instruments, did the primacy of vocal music begin to give way to instrumental performance practice? Or does this only apply to the change in courtly musical culture?

GN: We consider the 15th century as the birth of instrumental music, which spread more and more during the Renaissance. From this time on, the first musical manuscripts dedicated to specific instrumental ensembles are found. But, as rightly noted, this development concerns mainly the courtly music culture. Incidentally, one of the challenges for understanding and researching the music of the Middle Ages and the Renaissance lies precisely in the fact that we usually only know the perspective of the surviving sources, i.e. only that of the educated upper class. That is about the same as if in 500 years future musicologists would only come across sources of well-known operas and orchestral works and come to the conclusion that this and only this literature reflects the taste of our time. This is not the case, and then as now people enjoy a wide variety of musical styles. Both instrumental and vocal music has a strong tradition of oral tradition. The so-called “birth” of early Renaissance instrumental music concerns only a specific courtly trend that has survived in written form. However, this does not mean that vocal music has lost its importance altogether. It is charming to imagine how other, new music trends develop and also disappear over the centuries without leaving any traces or sources.

TC: In the Middle Ages, the written recording of notes was still largely unknown. On the basis of what sources are medieval songs brought to life today?

GN: The earliest medieval notations see themselves more as auxiliary indications than as clear vocal instructions – they refer to the basic voice and assume that the actual melody is known to the singer. In some cases, detailed notation appears in later song sources, which then allows us to fill in gaps. As early as the High Middle Ages, sophisticated notation systems were used, and in the Late Middle Ages they sometimes developed into marvelous, mathematically and logically thought-out works. At the end of the 14th century, musicians were already notating highly complex melodies, especially the rhythmic forms of the Ars Subtilior (style epoch between 1377 and 1420, note TC). These notations are created with professional pride and are enriched with riddles and pictures.
Nevertheless, despite sources, many questions about performance practice remain unanswered. Thus the question of instrumentation, but also the question of possible accompaniment of monophonic songs. Here, old pictures, paintings or even descriptions can help, but they usually lack important information. Certain painted instruments often show peculiar or even technically impossible details. By no means all painters knew the details of the instruments, and their works convey a basic idea rather than a reliable indication of instrument construction. As researchers and musicians, we try to use as many sources and clues as possible and put them together into a whole.

TC: What is your prognosis for the revival of medieval and Renaissance music? Will it experience a boom similar to the one we have seen in Baroque music over the last few decades?

GN: That’s an interesting point. I think we’re in a growing boom of interest for medieval and Renaissance music, but not in the way of today’s market for baroque music. Instead of an increased interest in the classical historical performance practice of medieval or renaissance music, I find that many people are living out their fascination with that early music in pop culture and crossover experiments. Social media and YouTube channels are indeed offering new platforms and audiences to medieval and Renaissance hobby musicians. An example of crossover, which is also quite fun for me and even meets a higher standard, is the group Bardcore. This mixture of pop music and old song and text forms has become quite popular just this year, even with the use of old instruments. Interesting in this respect is the YouTube channel Hildegard von Blingin` with well over 700’000 subscribers – and the musicians* are quite talented! However, this is not my field of medieval performance practice, but it is well done. And who knows – maybe this medieval crossover scene will inspire some listeners to turn to the classical form. Such crossover projects could become the igniting spark for our music. The fascination is there, the boom just has to take root in our concert segment.

Obviously, at that time I had already heard some recordings of medieval music (only a few, because there were not very many at that time and some of them were really quite awful), but it was singing and listening to the Carols that was to change my life forever: From that moment on and to this day, 15th century music became my main occupation.
It was the earliest Carols from the period 1415-1430 that first captivated me: here I sensed a freshness of color and a resonance that always appealed to the cultural sense of community. In particular, however, there was a simplicity and an immediacy of expression, with no sign of any grandstanding – which made most of the music instantly appealing. I later became acquainted with the much more elaborate and ambitious Carols from the Ritson Manuscript, which probably date from the 1430s and early 1440s. It was not until long afterward, with the release of the Fayrfax Manuscript in 1976 (and the wonderful LP recorded at about the same time by the Hilliard Consort with Judith Nelson), that I realized that this repertoire contains some of the most radiant music ever composed in England. 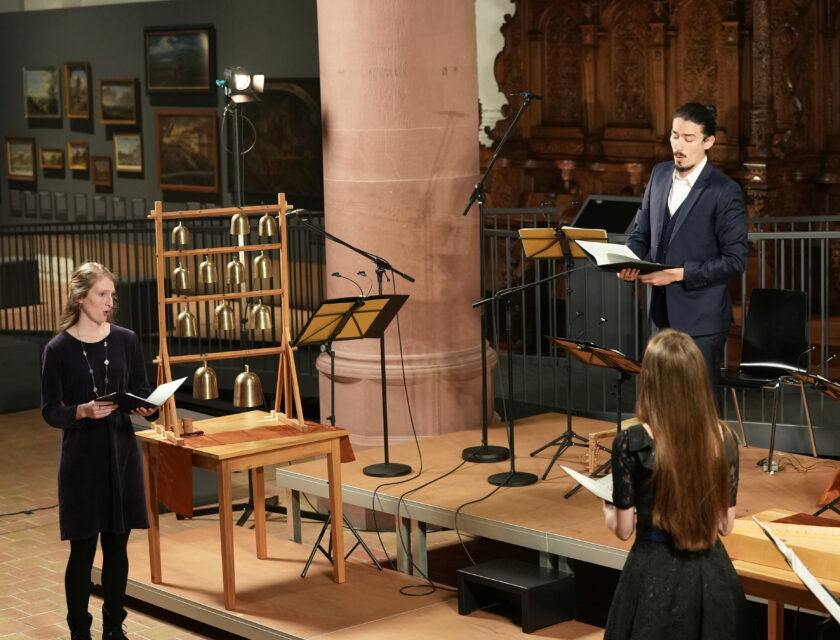 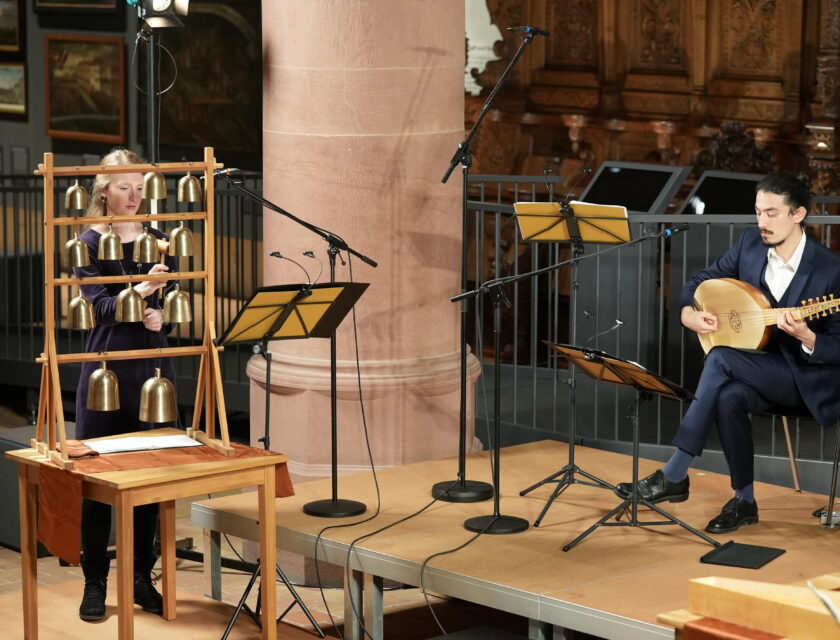 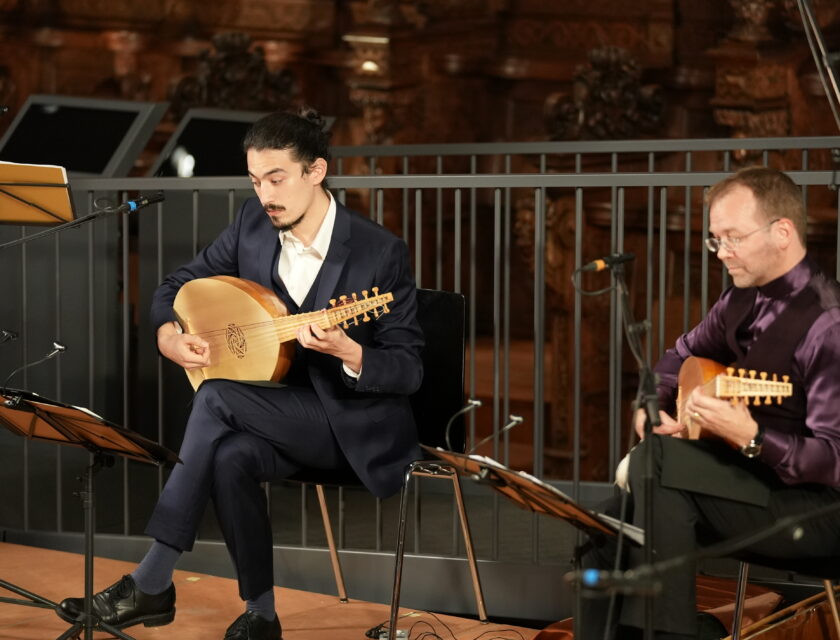 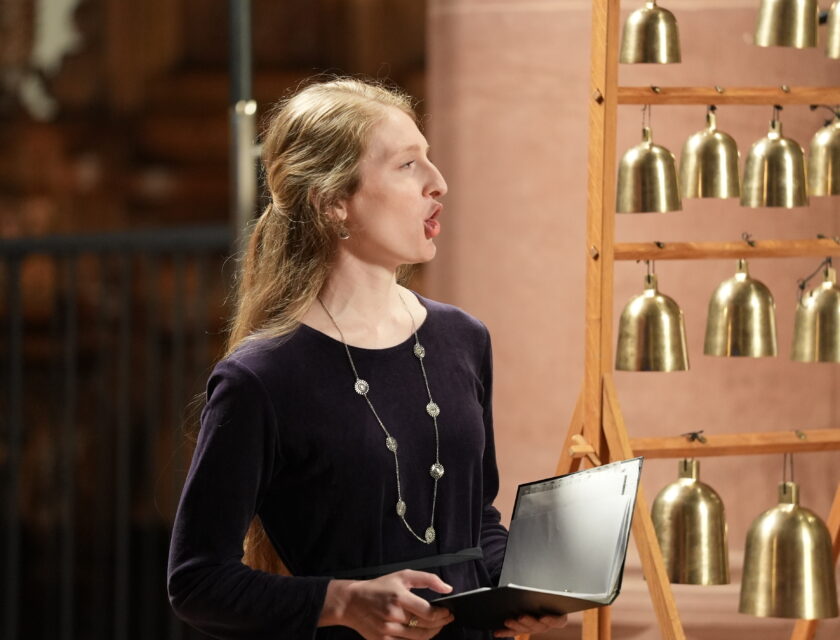 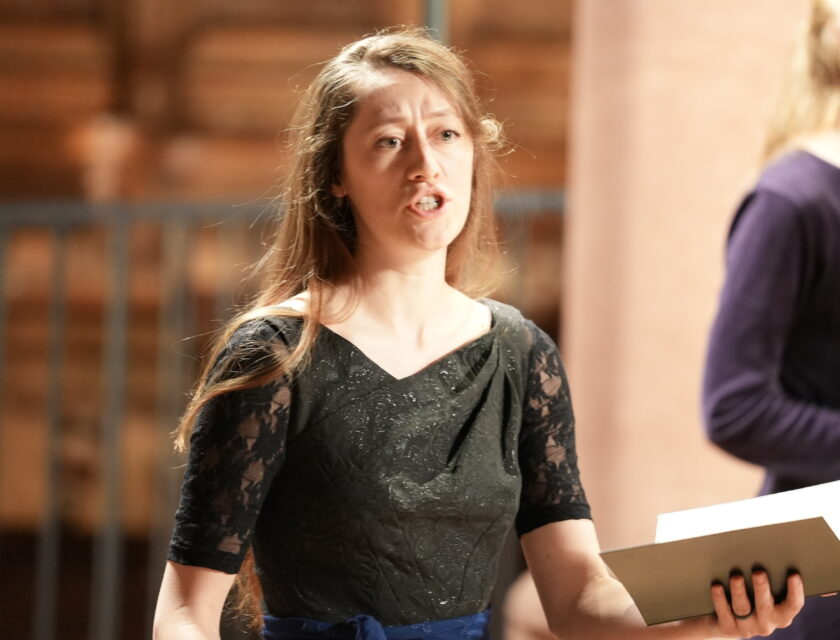 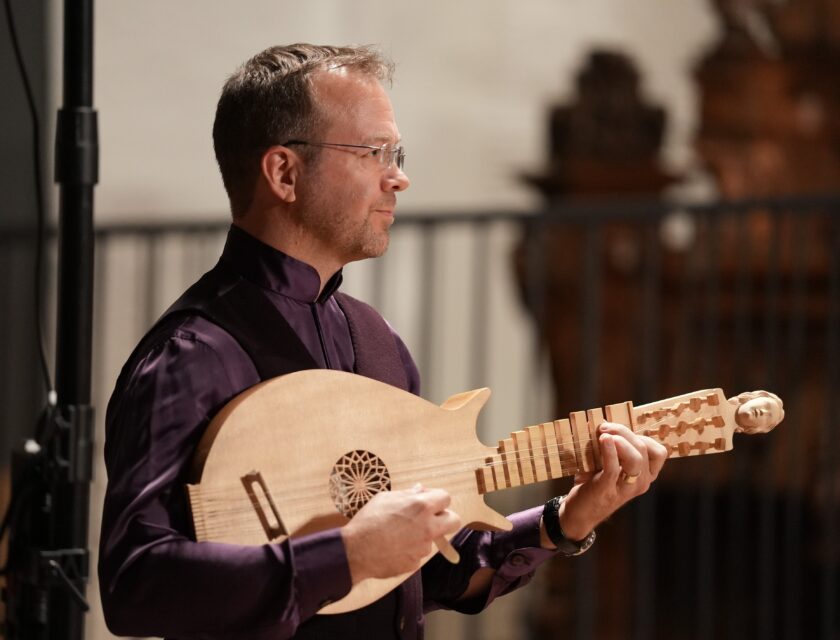 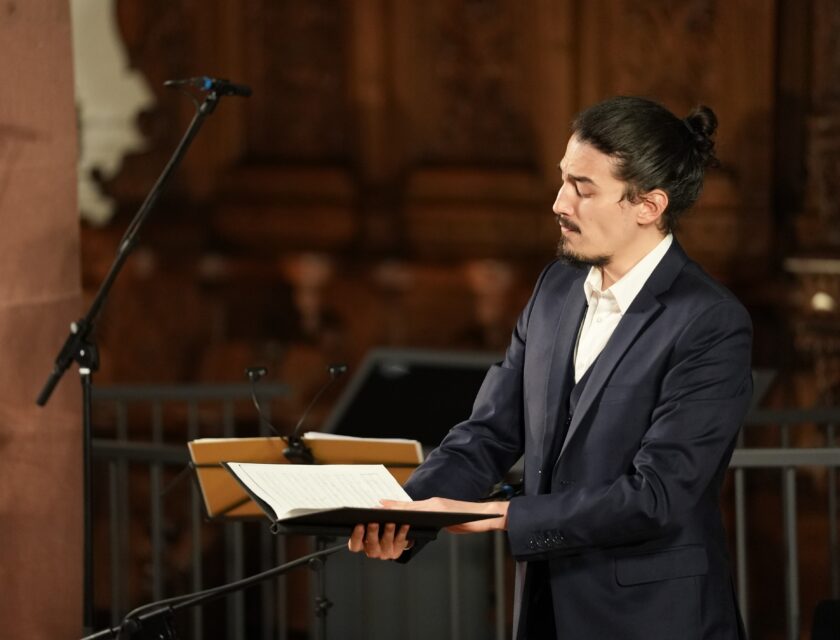 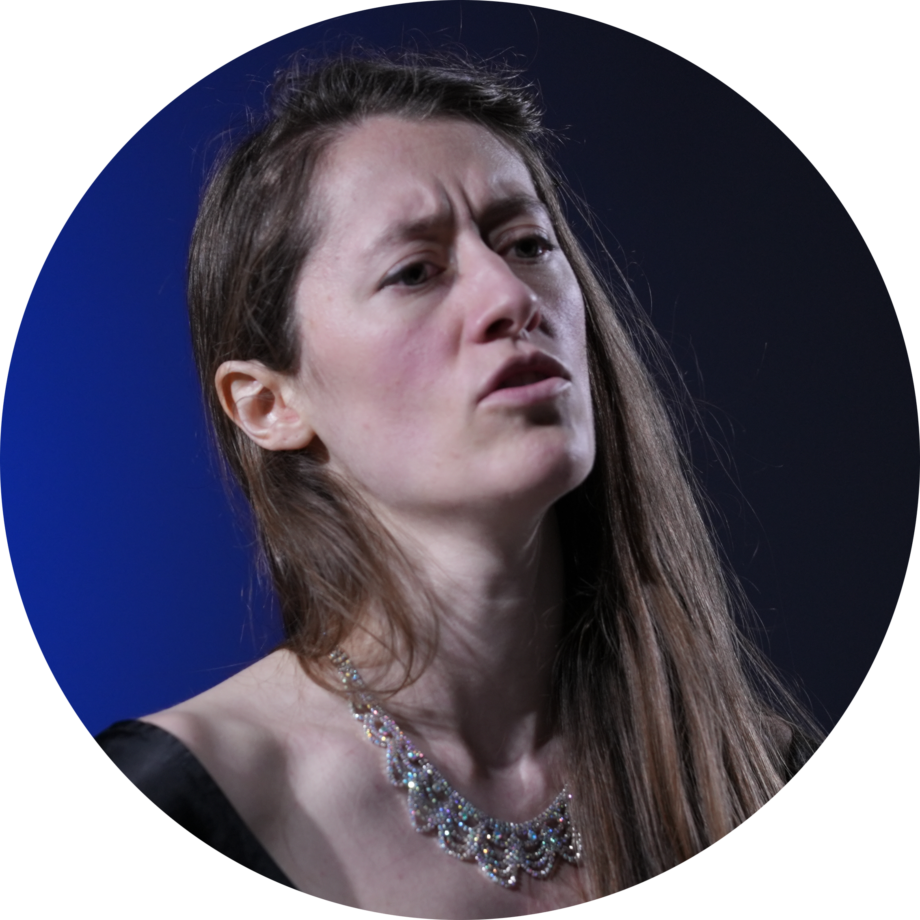 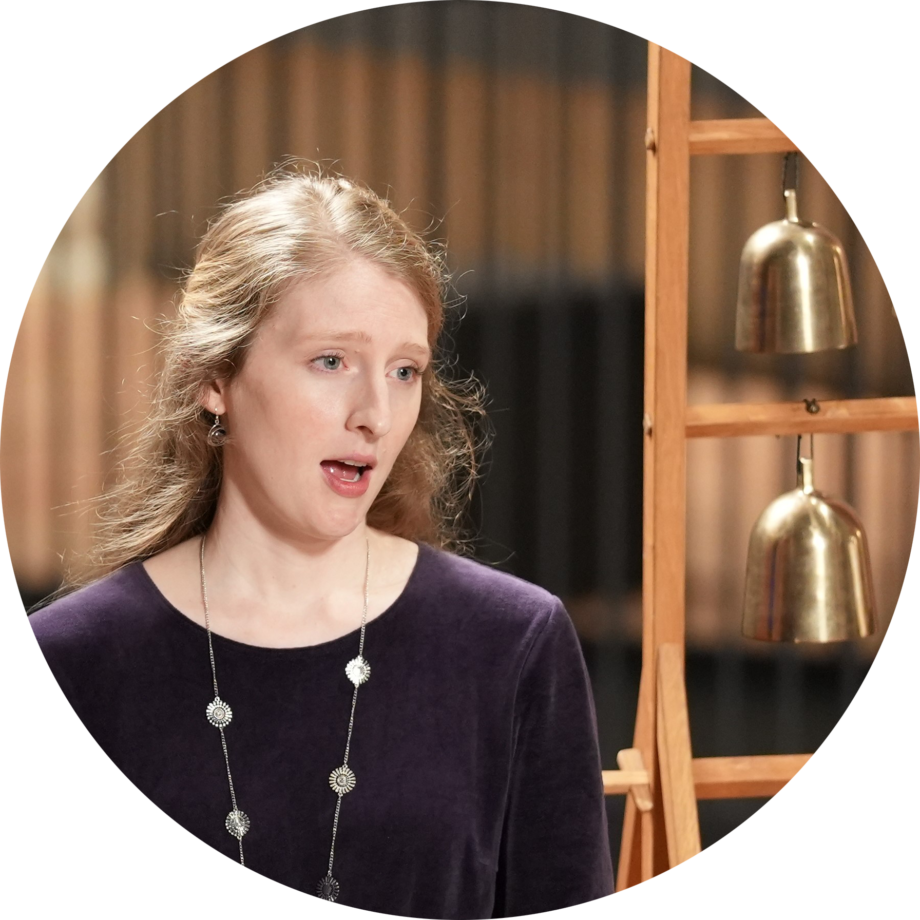 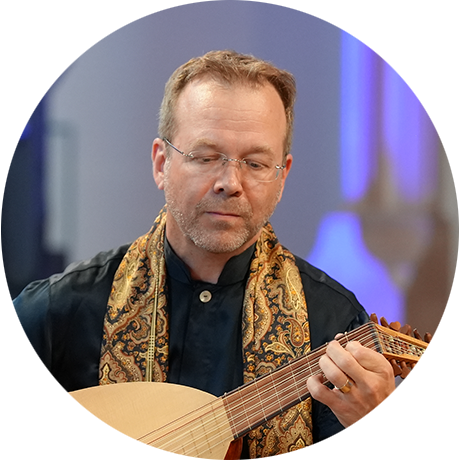 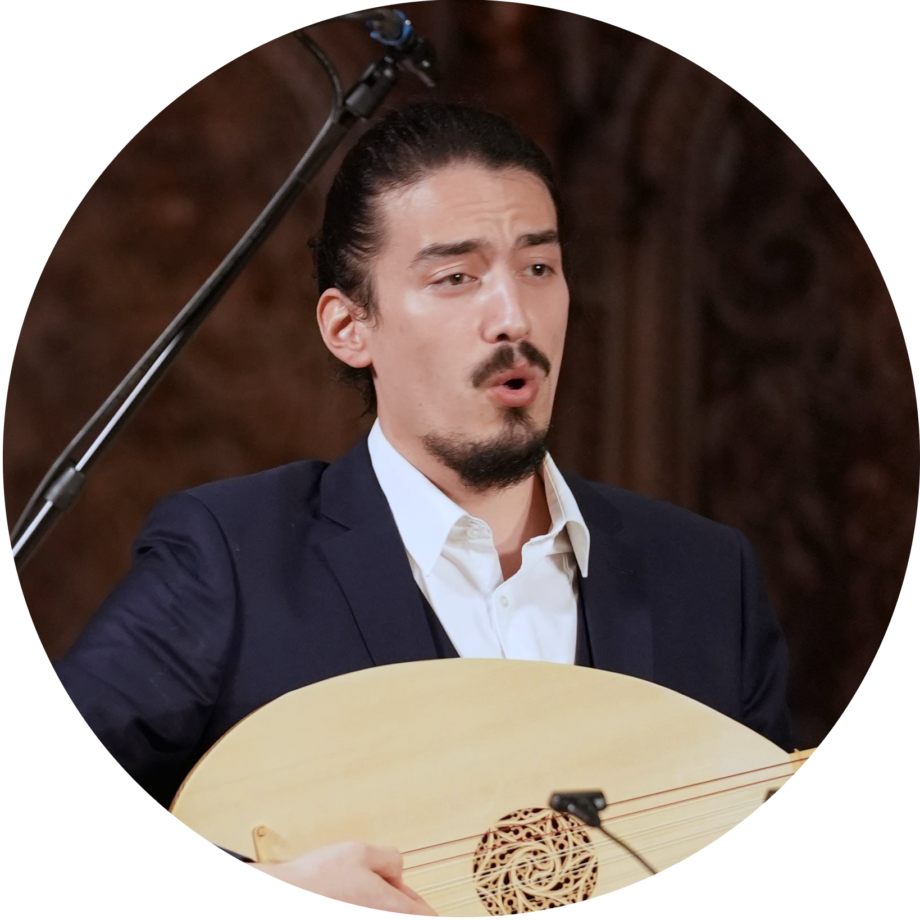